The local government ward of Caldecott is made up of Abingdon, south of Ock Street, and east of Drayton Road. 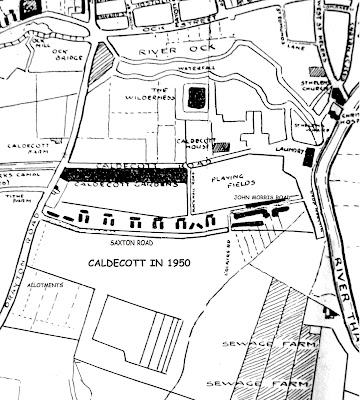 The area south of the River Ock was farmland until the mid 20th century when Abingdon Borough council built Saxton Road and John Morris Road. The road infrastructure still relies on the same two ancient bridges. You can queue 20 minutes or more to travel north up Drayton Road or by St Helen’s Wharf.

According to local historian, Agnes Baker (after whom Baker Road is named), the name Caldecott could derive from the old English word for cold (Cald), and cottage (Cot). It is thought Caldcot (under various spellings) could either mean a cheerless dwelling place, or a place of shelter for wayfarers from the cold, or a dwelling in an exposed location.

Abingdon Caldecott was part of the ancient manor of St Helen's, founded after the Norman Conquest by a Norman knight, Rainald, a tenant of Abingdon Abbey, who took the name from the nearby church of St Helen's. The manor was outside the parish of St Helen's and included land in Sutton Courtney, Sutton Wick and Drayton parishes. The manor changed hands and became the property of the Fraternity of the Holy Cross, and was then broken up into a number of tenancies. The Fraternity lands were then given to Christ's Hospital.

The Abingdon Borough boundary was moved to include Caldecott when housing was built in the mid 20th century, and so this area was taken from Sutton Wick. The name Caldecott was already used in  Caldecott Road, Caldecott House (now St Amand Drive), and Caldecott Farm.

There has been a lot of development since then and now the ward of Caldecott includes the following roads (as of 14th March 2019):


Thankyou to John McGowan's book 'The Origin of the Street Names of Abingdon' which I have brought up to date for Caldecott.